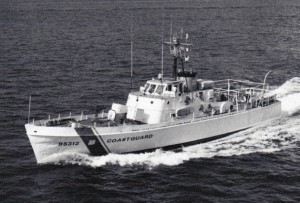 When I ended my last blog post on the Minnie V Rescue, the Coast Guard Cutter Cape Knox CG95312 was trying to save a fisherman from the stormy waters of the Chesapeake Bay. Criss Wolcott, who couldn’t swim, was too scared to let go of the keg he clung to and grab the lines we had thrown right over his arms. He was drifting down the port side back into the dark sea. The Chief was right. He was never going to let go of that keg. I needed to make another pass.

“Keep that light on him, Chief, and everyone pointing at him as we come about. If we lose him now— he’s done for.” The violent pitch as we knifed through the waves flooded the deck with a soaking spray.

My second approach looked good. I rang up all stop, then back one third to stop the ship twenty feet away from Wolcott and his keg. We were dead-in-the-water, but rolling dangerously as we drifted down on him.

“He’s right along side now, Captain, but he’s still too afraid to let go of the keg.”

Suddenly our most experienced deck hand, Seaman Casey, leaped over the rail and onto the landing net.

Leaning out as far as he could, Casey grabbed Wolcott’s thick woolen shoulder. Wolcott clung to his keg, growing more weary. His strength was giving out in the cold, and he was gasping to expel the swallowed cold putrid seawater.

Casey, with Wolcott precariously in his grasp, was now forced two feet under the water with every roll to port.

“He’s too heavy!” Casey struggled as he gasped a big breath, and shook stinging saltwater from his eyes when our starboard roll lifted above the surface.

The Chief, had plan Bravo. “Get that mooring line on the forward deck. Now! Move!”

Seaman Guthrie, a skinny little guy not long out of boot camp, jumped at the chief’s order. As soon as he stepped out of the lee of the pilot house, he was caught by a gust from the north that I thought was going to sweep him off his feet. He faced into the wet wind, curling his upper body into a spoon shape, defying nature at a Charlie Chaplin angle to the deck. He inched sideways in crab-like steps until he could snatch the mooring line. Wide-eyed with his first seagoing adventure, he handed the mooring line to the chief.

“We need to make a horse-collar sling, Casey. Get the eye over his head and under both arms,” With the little strength Casey had left, he got the sling in place and convinced Wolcott to let go of the keg.

“OK. Great!” The chief ordered, “Give a hand and let’s pull this hulk aboard.” Three other deck force guys grabbed the line. I tried to hold a steady heading and prayed for slow shallow rolls.

Nothing moved. Everyone was fatigued and struggling on the wet deck to keep their own footing.

“Get Kirsh up here—quick!” The chief screamed the order.

Kirsh, our electrician, was at his SAR station in the engine room. He was big enough to make any NFL defensive line coach drool. He looked like a Kodiak bear crawling out of the warm engine room den. He didn’t need to be briefed on his function. He jumped onto the front of the line. His size and strength gave everyone hope again.

The Chief wasted no time now. “Every time we roll to port, and the line goes slack, heave around and hold what we got while I take a stopping turn around the bit. We’ve just got to inch him in.”

Roll by roll, slack by taut, they inched the giant up the cargo net until Kirsh could reach him. Between Kirsh and Casey they managed to roll him over the gunwale and onto the deck.

Kirsh, gasping like a runaway steam engine, dripping wet, knelt over the beached whale of a coughing, spitting, but smiling fisherman. Kirsh choked out, “God damned man, I’m big, but just for the record—how much do you weigh?”

The fisherman tried to raise a hand to shake Kirsh’s and smiled. “Three hundred twenty four pounds, if you don’t count all my wet foul weather gear.”

Criss Wolcott was a lucky man, as was the rest of the crew of the Minnie V. Rescued by the Cherokee, they were now all safe and together in the Norfolk Public Health Hospital. As reported the next morning in the Virginian Pilot, the Captain of the Minnie V. said, “Once we started to take on water, we sank in two and a half minutes.”

They had all struggled, but survived in the cold and stormy Chesapeake for 35 minutes.

I’m sure, to fish again another day.

I have to tell you right up front. I’m a story teller. After graduation from the Coast Guard Academy in 1957, my twenty-eight years of active duty have given me a lot of fodder. I finally heeded my daughter’s pleas, “Dad, you have got to write those stories down,” and published my memoirs in 1975. Caught up in the writing experience, I moved on to publish a novel in 2019 and I'm continuing to write. It's my new number 1 hobby. View all posts by Dick